Werewolves... made of Legos?! 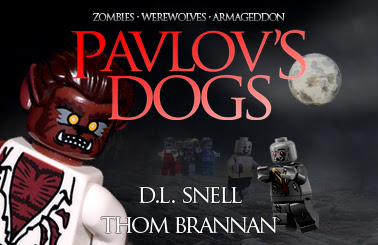 Fans are great. So is fan art. But collaborating with an artist who's also a fan? That has got to be the greatest.

When our zombie vs. werewolf novel, PAVLOV'S DOGS, first came out, Thom Brannan and I were very pleased with a review of the story over at Bricksofthedead.com. The reviewer, Evan Roy, favorably compared the book to one of Permuted Press's bestsellers, EX-Heroes by Peter Clines. He had some very nice things to say.


"PAVLOV'S DOGS is high quality entertainment well worth your dollar, and a needed break from the mundane."--Evan Roy

Bricksofthedead.com, for the uninitiated, mainly consists of zombie comics... in Lego form. Evan, our reviewer, has had much practice at building Lego dioramas. In fact, he has created several based on scenes from Permuted books. So imagine our surprise (and nerdy elation) when Evan offered to create a comic strip for the first chapter of our story.

Thom and I jumped all over this opportunity. We wrote the script, and Evan did a brilliant job fleshing it out... with Legos.

The strip will be eight episodes long, and there will be an associated giveaway for signed copies of the novel... and it's all starting today!