Held in rainy Seattle, the event had all the elements for a successful zombie horror convention: a group of seven fellow Permuted Press authors, plus owner/publisher Jacob Kier; a great volunteer staff who tended to the exhibitors like waiters who deserve big tips; guests like Tom Savini, Judith O’Dea, Sam Trammel, and Norman Reedus from The Walking Dead; tons of people dressed up like walking corpses and zombie survivalists; and of course… cupcakes decorated like brains.

It should have been great. 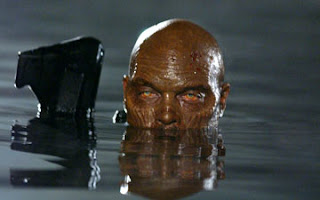 But the moment I saw the actor who plays Romero’s Big Daddy tending to a cut finger in the men’s restroom… I knew something was wrong.

Earlier, I had been joking with Jacob Kier about the best place to release the zombie virus, if you were some kind of weirdo who wanted to engineer the outbreak. Sure, you could release it at an airport and it would travel all the way around the world, but… wouldn’t it be way cooler to release it at a zombie convention? If you think about it, everyone there’s already disguised as a zombie, right? Like a wolf in wolf’s clothing—obviously fake and zippered wolf’s clothing.

There was one costumed fan in particular, a blonde dressed in a bloody nurse’s uniform, her jaw ripped off and her tongue hanging out far enough to rival Kiss’s lead singer. She was fully in character when she shambled toward the table I was sharing with Permuted authors Craig DiLouie and Peter Clines. 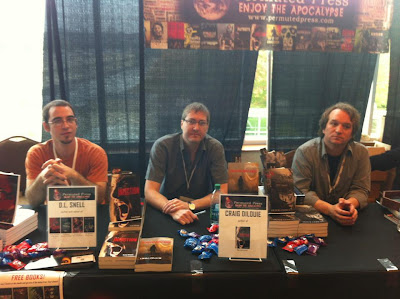 The table was set up in a long hallway right outside the doors to the ballroom, which served as a giant exhibition space for the other vendors of horror comics, frightening sculptures, counterculture T-shirts, and all other kinds of scary wares.

Most people at conventions, when they approach my table, have their eyes fixed on my books. If they make initial eye contact, it’s usually just to say hello, but then their attention goes right back to my covers. This nurse... she didn’t even glance at the cover of DiLouie’s The Infection as she picked up speed, dragging behind her a Land of the Dead poster she’d just gotten signed by the guy who played Big Daddy.

“Hi,” DiLouie said, engaging the nurse like the great salesman and exuberant author he was. “Can I tell you about my work?”

The nurse lunged… only to snatch up a copy of The Infection. 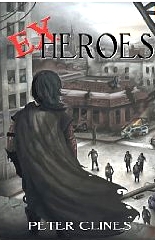 On the other side of Craig, Peter Clines sat down in his chair after having jumped up, ready to tear open his overshirt for some reason, as if to bear the chest of his black tee underneath. He kept an eye on the blond nurse as he continued to sign and sell copies of Ex-Heroes to his fans. If it’s one thing people love, it’s superheroes vs. zombies.

After practically giving DiLouie a five-star review right then and there for The Infection—the kind of review where the reader openly wishes that the rating system allowed for, like, infinity stars—the tongue-wagging nurse went on to ask about his first book, Tooth and Nail. DiLouie forgot all about his own mortality.

“Well, my book asks the question, what happened to the military during the zombie apocalypse? You know, in most zombie books the military is either cannon fodder or… they go insane and ruthless and take rule over everyone around. But in Tooth and Nail they—”

Craig stopped when he spotted a bloody hand reaching from behind the blond nurse, reaching for her mouth. She noticed it a second too late, going cross-eyed as she glanced down at it.

It grabbed her by the fake tongue and yanked her around.

A man dressed like Captain America stood behind her, zombified, his mask ripped, his cheeks and shield bloodied. 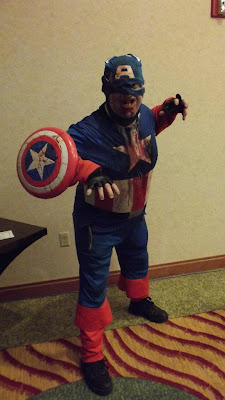 The captain opened his mouth, and, groaning, letting gory pieces of someone else’s throat tumble out over his teeth, he moved in for the bite.

“Peter, what are you doing?!” I shouted as I reached for the three-pound copy of my newest epic thriller, just something to throw at the star-spangled monster. “Get up and help!”

I threw the thriller and scored a headshot, dinging the captain’s eyebrow with the edge of my book’s spine. It opened a gaping wound in his eyebrow, which didn’t bleed.

I groped for anything else I could throw, but came up with a handful of marshmallow eyes we’d been handing out as freebies.

“This is not happening, this is not—”

Clines turned on me then, ripping open his overshirt to finally reveal the black tee underneath. I was surprised to see an insignia emblazoned on his chest, a big silver stylized “D” in an even bigger silver oval.

I couldn’t believe I had never recognized him before, even without the mask. He was a real-life super hero, like Phoenix Jones. In the Permuted Press panel earlier that weekend, Clines had even said his weapon of choice against zombies was denial. I just hadn’t put two and two together. I hadn’t realized he was talking about...

“This is not happening!” the King of Denial shouted one last time, and the dead captain exploded like some kind of plague bomb, splattering everyone in the vicinity with bits of flesh and gore, and shards of bone that cut into them like shrapnel.

One girl picked the captain’s eyeball off her cheek and stared into its glassy black hole while she screamed.

And everyone around her started vomiting too.

Everyone who had been tainted by the captain’s explosion, at least.

They all started vomiting blood.

Clines, realizing his mistake too late, slicked his hair back in shock and disbelief. The real-life superhero sank down in his chair behind the table, slipping into a force field of complete and utter denial.

The blood-splattered zombie fans stopped vomiting and started turning on the rest of the crowd. They moaned. One lunged forward, biting.

Screams erupted. A few of the survivalists, acting on instinct, raised their guns... and threw the useless pieces of plastic at the infected.

“Craig!” I shouted at DiLouie.

He looked at me, and I indicated that we should corral as many healthy fans as we could into Peter Clines’s growing shield of denial. 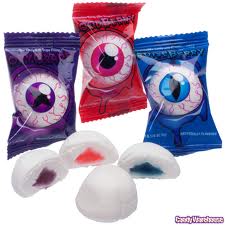 DiLouie knew instantly what to do. He started tossing out the marshmallow eyeballs as bait.

The infected glanced down at the crinkly packages thrown at their feet.

They looked up at Craig.

I looked at them.

They looked at my book.

I told them what it was about.

They seemed interested and I thought I was going to make some sales. But then they all fell to the ground and started clawing for the eyeballs, fighting each other for them, growling.

While DiLouie reached into a box for more eyeballs, I hurdled our table and started helping people over into Clines’s personal bubble. One girl was dressed as a zombie castaway in a coconut bra.

“Are these bites?!” I asked her, pointing out the nasty, realistic looking wounds on her forearm and throat.

I didn’t know what to do.

So I snatched up the fake severed arm that one of the other Permuted authors, Timothy Long, had left sitting on his table next to mine. 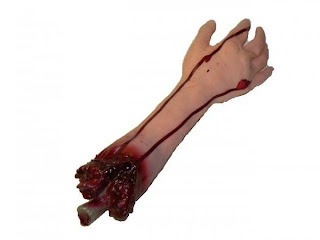 Earlier, DiLouie had stuffed the fake arm down his blazer sleeve and had extended the hand to shake with another fellow novelist, Jason Hornsby. Hornsby had gotten quite the shock when he’d ripped off the arm of one of Permuted’s bestselling authors!

I dangled the fake limb in front of the castaway’s face like I was teasing a dog.

She glanced at it.

Then glanced at me.

Then glanced back at the arm again.

Then glanced at my book, but there was no time for a sales pitch.

I launched into one anyway.

“Hey!” Timothy Long—who, for whatever reason, had been standing there the whole time just laughing at everyone getting killed—grabbed his fake arm from me and whopped the female castaway over the head with it.

“Nothing,” I replied as I lifted her over the table into Timothy Long’s capable arms. She hugged him around the neck, and her grass skirt dangled over his powerful, manly guns. 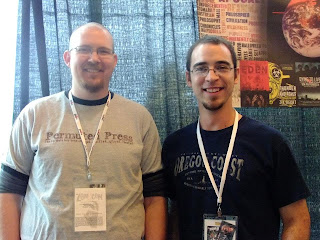 With her secured, I started glancing up and down the long hallway outside the ballroom, trying desperately to spot our publisher and my good friend Jacob Kier. Jacob was tall, about as tall as the guy who played Big Daddy. About as tall as the titular character in that horror movie Jacob. I couldn’t see him.

I formed a megaphone with my hands and shouted his true name: “Beavis! Beavis!”

But then… from deep in the ballroom, where there was nothing but screams and the sound of fighting and things falling down, I heard…

I went running after my friend Jacob.

I only looked back once.

Behind me, back at our table, the castaway in Timothy Long’s arms leaned in as if to kiss him on the cheek, but then suddenly she was vomiting in his face and all down his front, and Tim went stumbling backward with her still in his arms, and they both crashed through the big windows of the convention center, and they went tumbling down three stories to the parking lot below while the Seattle rain blew in.

Find out who dies and who… prolongs the inevitable…
Posted by D.L. Snell at Monday, October 24, 2011

Who will survive and what will be left of them????

This is amazing! Can't wait to read part 2!!

That was great. You guys were so awesome to talk to!

OMG! You guys are killin me. I love love love it!

Hilarious! I love it! You know, I thought I was just reading a review of the con at first... Then I thought to myself, I don't remember that... LOL!

Thanks! I crafted the first few paragraphs to grab people's attention: "What?! This guy didn't like zomBcon?!"

But you'd be surprised how much of this stuff actually did happen. For example, the Big Daddy thing. He really did cut his finger.